My great aunt, Fairlie Nicodemus, passed away quite suddenly today at the age of 101. She had a remarkable life as one of the first female psychotherapists in the United States. You can find her memoir here. Proceeds will be donated to the Audubon Society. 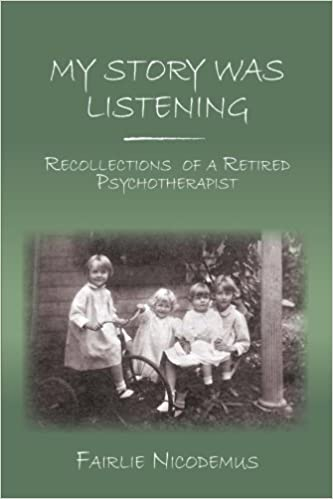 She was only in a nursing home for the last few months of her life. Her family worked tirelessly to keep her at home as long as was possible, and find her care after she could no longer care for herself.

I happened across Fantastic Mr. Fox last week on streaming video. It's great fun, if you don't mind twee. Never mind that my entire extended family often resembles the cast of a Wes Anderson movie; my first thought after watching was that Great Aunt Fairlie would love it.  She had a deep connection to all wildlife, but especially foxes.

I remember her singing "The Fox Went Out on a Chilly Night" and strumming guitar at the family farm on Long Island. Based on Roald Dahl's book, the film is a 90-minute riff on the same archetypal story.

Her hearing and vision remained quite good, and while she had no short term memory, she could carry on a conversation and follow the plots of books and video. For a while she had taken to conversing in French when my aunt came to visit. This became a problem, because she was not always aware which language she was speaking in, and none of the nursing home staff knew French.
I spoke to my parents about showing her the movie on a tablet or one of the nursing home TVs next time they visited, and they were enthusiastic. They were researching what streaming video service they could hook up to their Android tablet. That was last Thursday.

I got the news yesterday that her health was failing fast. She was experiencing severe dehydration from a bacterial infection known as C. diff, and was agitated and incoherent as a result. I reassured my aunt that she would become calm again once the IV restored her fluids and electrolytes, but it took an extra eight hours and several calls from family to find a doctor who could prescribe morphine. She was peaceful at the end, and recognized her nephew and grand-niece.
My relatives' take on the care at the facility was that the nursing staff was dedicated, but overwhelmed. Upstate New York is Trump country, and anti-vax sentiment is prevalent. As a result, the nursing home was operating with half their normal staff. They simply could not find vaccinated people to fill the jobs. The result was a situation close to triage. It's true their everybody has their time, but my great aunt's final weeks were filled with a lot of needless suffering and at the very end, extreme pain. This happened as a direct result of fearmongering, ignorance, and misinformation.
People need to understand that refusing vaccination puts lives at risk—both directly from COVID and indirectly, as above. Take time to engage and educate when you can.
Fairlie had a good life and a long life. I just wish she had gotten to stick around a bit longer and see that movie. She would have enjoyed it.
* * *
I couldn't decide which was the best version of this folk song out of the many recordings available. Of course, nobody plays it like my aunt.

Bob Shane does a nice rendition, if you are partial to fiddle. Laura Veirs actually looks a bit like my aunt did when she was young, so that was the tiebreaker.

Thank you so much for these thoughtful words. Aunt Fairlile would still be with us, if there were adequate staff at the Rehab & Nursing facility. There would be if it were not for the steady stream of antivax "propaganda" (dishonest, slanted publicity on social & other media)

Well said cuz. it is sad that the whole family couldn't have gathered at her bedside. In modern times family is spread across the planet.I wonder if, except for lifespan and frapachinos, life in the past was more soul satisfying. Whole family in one village. Maybe we will gather for a celebration of her life in the spring.