Waiting for the Light to Change

It was the most victimless crime imaginable.

Somebody spray painted the word "love" in cursive, underneath the bridge by my apartment. I saw the word outside my front window, early on Tuesday morning.

Unless you are Banksy, nobody is going to ask you about the motives behind your street art. But whoever created this particular work of graffiti put a lot of thought into it. The first thing that struck me was the half-hidden "DANGER" sign juxtaposed with the word "love." It's funny because it's true!

What I noticed a few days later was that the writing looked black some days, and bright gold on other days. This really threw me. 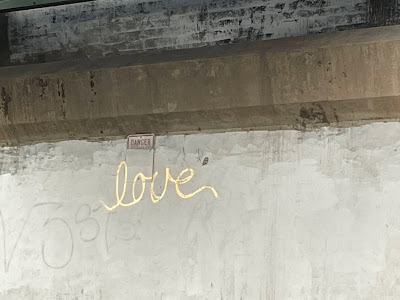 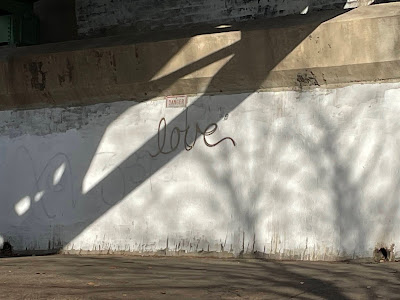 Was somebody so dedicated to advancing the concept of love that they were sneaking back every night to repaint the words in a different color? Closer examination provided a more plausible explanation.

It was a trick of the light. The bright gold paint was so reflective that at certain times of day, from certain angles, it reflected back a completely different portion of the spectrum.

I had to walk right up to the paint and actually scratch away a bit before I believed the gold hadn't been painted over the black.

That was when I noticed a third element to this clever street installation. Immediately to the right, but much fainter. 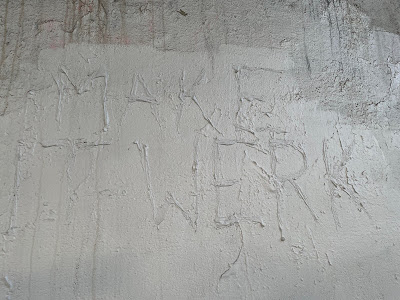 Was it the same artist?

Did they mean to say:

We'll never know. Authorial intent was unfashionable to presume even back when I was an undergrad.

Still curious, I googled the phrase "black and gold." This song by Sam Sparro came up. It was a dance pop hit a few years back. According to the songwriter, it's all about God.

(And here I thought only Moby could pull that off.)

Take a listen, if you like.
It's ok, I guess. I never heard it until yesterday.
Sparro's concept of God isn't the same as mine. Maybe I'll talk more about that another time. But I hope that if people take anything from this book and this project it's that people having different perspectives on God is really interesting to me. Reality is a multidimensional sculpture. Like a statue by Rodin, it's best viewed in the round.
Hearing the song wasn't enough. I had to see the light change one more time. I noticed that the letters stayed bright golden through afternoon and into dusk, until all light had faded. The next morning was hazy and overcast. The word "love" was still bright yellow.

I had planned to go to the gym that Sunday morning, but I stuck around.
I had to see the effect. I needed to know that what my camera had captured, without filters, was real and could be recreated.
So I waited.
The sun took its sweet time coming out.
So I planted some bulbs.
Still hazy.
I had time to think about my friend whose dad is in the hospital with lymphatic cancer. He was going to come to Portland for Thanksgiving, but I told him he needed to be with his family. I also told him I would be sending agnostic prayers, which was true but was a bit of a misstatement—I'm a deist. I have a lot of tense, silent, one-sided conversations with God but I don't really do the intercessional prayer thing much. This morning was an exception.
The sun took its sweet time coming out. Around about 1:30 PM I got my moment. I took my picture. In another few days all the words and the paint will be gone. I may have been the only one who noticed.
Posted by Tess at 10:44 PM