I put this up on my other blog, artmeetscode.com, in July and took it down after about two weeks because I don’t think anybody ever read it. Also it felt too much like a pity party.

Please don’t think that I think about my divorce all the time. My ex husband and I have been apart longer than we were ever together. It’s been on my mind a lot this year, because, well… time to think.

I’m putting this post up again because of a conversation I had with my mom yesterday while we were out walking in the Hoyt Arboretum. She sees the hand of God everywhere: in small coincidences, in particular. I have difficulty with this outlook, very common among evangelicals, charismatics, and people who, whatever their ideology, happen to believe in an interventionist God.

I am a planner and a doer. When I set a goal, I usually achieve it. But when I look back at my life over the past 14 years, the consequences of my own actions have been dwarfed by the impact of random chance. And often not for the better.

In the space of fifteen minutes, on July 7, a microburst took down three trees in the backyard of our home in Charlotte, North Carolina. One of them landed on my neighbor’s pickup truck.

This unusual weather pattern seemed like every other summer thunderstorm. We didn’t even lose power. Until we ventured outside and saw the damage. Until we talked to the neighbors. Who were not happy, to say the least.

I generally avoid trying to befriend or even casually get to know my neighbors, and these people remain the reason why. They seemed like the ultimate cool couple: the guy was a musician (although he worked for a bank) and his wife was a freelance photographer. She had accompanied me on my regular restaurant review column, to Meskerem, the new Ethiopian place in town. We had hung out a little bit socially and I was hoping they would get to be our new “couple friends,” in our neighborhood, instead of a 40-minute freeway drive away, like my in-laws and most of the book club that formed our core social group.

She was livid at the demise of her pickup truck.

“You should have taken better care of your trees!” she told me.

What could I say? They were alive and healthy. Until they weren’t.

One of the unique features of the property, and one of the reasons we’d bought it, was the patch of forest at the back of the lot, bordering on a stream and a right-of-way. In theory, we could have built an artists’ studio or a mother-in-law apartment out there. In practice, we were happy to just let the woods be woods.

That was the last time I talked to those neighbors. After that, they built a spite fence (homemade, out of chicken wire) to divide our properties. I was left to deal with the insurance claim situation — and the expense and logistics of removing the debris. My husband was a busy corporate lawyer. I managed all of our finances, all of the taxes, all of the household issues — from ascertaining that the copper wire had been stolen out of our exterior HVAC units and getting it replaced to putting pressure on the Kingsdown Mattress Company to fulfill their warranty after documenting that our California King pillowtop mattress had sagged measurably in the middle (the dreaded “taco” effect).

I used to read a lot into the significance of that date.

Now, not so much.

The angry neighbors. My feelings of isolation and abandonment. My husband’s affair.

I wanted to believe that there was a higher purpose in our separation — that everything happened for a reason.

If you are a recruiter or a prospective employer, this is the reason that my Career in Tech didn’t really get started until Age 32. Up until that time, I was freelancing and homemaking — expecting to be a full-time mom, announcement in the next family holiday newsletter.

Sometimes plans don’t go as expected. I always thought there was beauty, meaning, and purpose behind that. Maybe there still is. I don’t know. Maybe my husband was meant to be with the woman he left me for. She was beautiful. Jet black hair. Trim physique. Yale Law School grad. A coworker. Also married. Didn’t want kids.

The affair started a few months earlier, while they were traveling in Alabama together, on business. The hotel accidentally sent them the “couples package” — roses, wine, and chocolates — even though they were were staying in separate rooms.

He told me in one of the last conversations we had together, that antidepressants had "made him a different person." He also thought they had saved his life.  I saw the changes firsthand. I am glad a part of him lives on, but I grieve for the person I lost.

Ten or eleven years ago I would have told you that everything happens for a reason. That I was destined to be an entrepreneur. Or raise children with somebody else. Now I really don’t believe in destiny — or if I do, it’s not the type that you can read from a three-digit sequence.

Now I think we find our meaning and purpose elsewhere. Namely, in how we react.

The wisdom to know what we can change and what we can’t. The courage to act if we can.

That’s the only meaning that endures, after the acid bath of time has stripped away the rest. I think somebody made that into a poem. I think they called it the Desiderata. 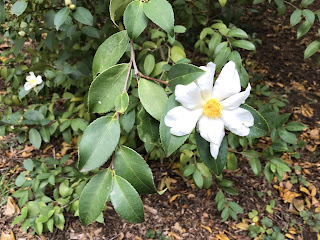