I Am Not an Apologist

Last I heard, my friend's dad was doing much better. Thanks for those who sent prayers.

Yesterday was quiet and relaxing for me. I celebrated the day off with dim sum and writing. Meant to share a Washington Post article I ran across but needed to find a way around the paywall. This local story and the video below do a good job communicating the same facts.

Plymouth's museums get roughly 1.5 million visitors annually. The Wampanoag museum gets 800 people a year. That's all.

I knew the story of Thanksgiving had been badly whitewashed, but I had no idea that Squanto, the man who taught the Pilgrims to plant corn, had been abducted and sold by the English as a slave four years earlier. Did you?

When I think about Christianity, the kind I was raised to believe in, I think about liberation theology and social justice, Dorothy Day's Catholic Worker Movement, the American Civil Rights Movement of the 1960s, and the end of apartheid in South Africa.

"The arc of history is long, but it bends toward justice."

Does any of this make up for the evil done in the name of Christianity? For the genocide of First Nations people, for the Crusades, the pogroms, the Holocaust, for the burning of women as witches? 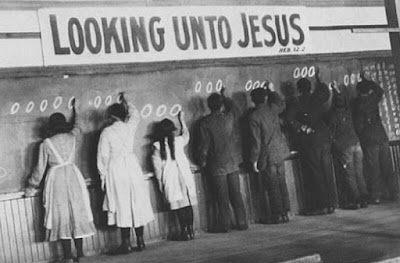 That is something that God and Jesus will have to answer for, on Judgment Day.