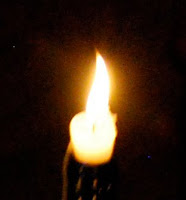 Wishing you light in the darkness and shelter from cold. May you find comfort and joy wherever life takes you. Much love. Thanks for reading.
Posted by Tess at 10:19 AM No comments:

"Prejudice against Southerners is generally socially acceptable among people who should know better." - Allan Massie

NPR is an unlikely place to find relevant cultural commentary on the American South, but their review of "Redneck TV" is spot-on. The South of reality television appears to be populated only by stupid white people wearing hats. They hunt. They fish. They talk funny.

The article left me wondering were to find depictions of the other American South -- not Nashville, not NASCAR -- but the strange, half-haunted landscape that I left behind three years ago. Now that director David Gordon Green has moved from George Washington to Pineapple Express, what else is out there? My top picks would include documentaries like Benjamin Smoke and Searching for the Wrong-Eyed Jesus, the gentle comic surrealism of Dorne Pentes' The Closest Thing to Heaven, and indie narratives like Winter's Bone. Granted, it's easy to romanticize subcultures birthed from poverty and decades of isolation...far more challenging to render them convincingly.