Zondra Douglas passed away this week from cancer. When I interviewed her six and a half years ago, she was 25 years old. She was young to have so much responsibility: mother of two daughters, single parent, college student, employee at the Chick-fil-A, and a church Elder. She is young to be gone now. Prayers and best wishes for all of her family and loved ones.

We belonged to the same church: Seigle Avenue Presbyterian Church in Charlotte, North Carolina, next to the now-demolished Piedmont Courts Housing Project, where Zondra grew up. She was gracious enough to let me interview her for Southern Cross. 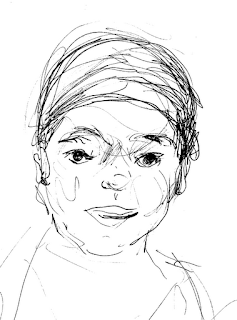 Below are some brief excerpts from that interview:

What would you say to somebody who is from the suburbs and has never really interacted with somebody from a different socioeconomic group?

I think that everybody needs to get out of their environment. However you have to do it. You need to find out what’s going on where somebody else lives. Because then you know what’s going on in the world.

What would you describe as moral values?

Just being honest and real. Like being able to tell people stuff even if it’s not something they want to hear. Like my friends don’t like me, because I say, well, you shouldn’t have called me if you did not want to know the truth. Because I’m gonna tell you, whether you want to hear it or not.

I mean, we just got to be that way. I’ll listen to you whine for a little bit, and I’ll let you get some stuff off your chest that you need to get out, and then I’m gonna tell you, well, why are you still doing that?

I try to be kind when I’m saying stuff.

I’m also asking all my interviews subjects, do you consider yourself an evangelical Christian? Why or why not?

Hmmm. I guess yes, and no. I don’t carry my Bible around and preach to people, in that sort of a way, but I try to treat people the way that I want to be treated. Like I just show how you’re supposed to be.

I don’t go around saying, the Bible says this, the Bible says that, but I really try to be genuine. Like, not hurting people and not doing mean things to them, and just showing them that you need to be godlike, not just preaching to them all the time.

Because even if I’m preaching to them and I’m being mean and hurtful, that’s not going to help them to want to be a Christian. Now I do tell people to go to church all the time! Or I try to invite them to come to church with me. I am definitely an advocate of people going to church, and saying, “You need to get out of bed Sunday, and go to church!”

One thing that I’ve noticed about you is that you have a lot of confidence. You’re very clear in what you think and you say things with a lot of conviction. Where do you think you learned that?
Probably my grandma. My mama too. They talk a lot. It’s just kind of, we say what needs to be said. So I got that from them.

They say if you name your wish, it won't come true.

I am not sure the same is true of prayers, but why take chances?

This one is important. I hope somebody is listening.
Posted by Tess at 7:35 PM No comments: