Prayers for the People of Norway

I read the news headlines this morning with sadness and dismay: an apparent right-wing fundamentalist Christian in Norway who killed 92 people with a bomb and a shooting spree.

I wonder how many sermons will touch upon the atrocity tomorrow? I wonder what their conclusions will be. It seems fairly trite to say that real Christians do not murder people, any more than real Muslims or real Buddhists do (whoever gets to define "real"). I know almost nothing about the suspect's life or beliefs, or about the sociopolitical backdrop in Norway. It strikes me that people who really are that angry, that despairing, that deranged, will find some excuse to get their guns or their fertilizer and that it is the job of law enforcement to stop them. Mostly.

All I would ask is that for one minute Christians put aside their moral superiority and remember that there is venom in the Bible as well as healing. The venom is mostly what people outside the church see and react to, in fact. Don't let that portion of hate sit alongside the scoop of lovingkindness. You never know whose mind it will poison. You never know what child or bored adolescent might take it to heart. You can't love your neighbor while hating Barack Obama, the government, gays, Muslims, immigrants, you name it. You just can't.

You can't love your neighbor while hating right-wing Christians, either. I am writing this blog entry for the two or three evangelicals who might still be reading this blog, but just as much for the progressive and mainline Christians who cherish their separateness. Complacency and smugness breed contempt. Contempt is another name for hatred. 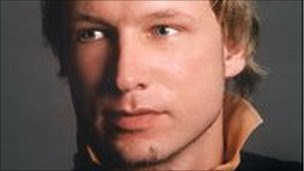 Would 92 more people in the world still be alive had Anders Behring Breivik encountered a few more Christians who preached decency, respect, and tolerance toward those who believed differently, and a few less who preached hatred and violence? I have no way of knowing but next time around do you really want to take that chance?
Posted by Tess at 5:03 PM No comments: