Happy Easter from an Egg Thief 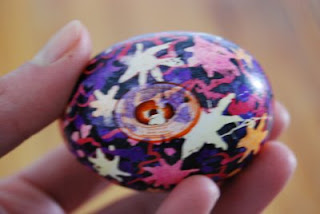 I was just getting ready to go to church when a neighbor came up and knocked on my door to tell me that my dog had pulled her trolley loose. The hook had held for eight months, screwed into my back door frame, and it had to come loose today. Still have no idea how I'm going to fix it.

Luckily, my dog was ok, so after giving her a brief walk, I drove over to St. James Episcopal Church in Greenfield. After I parked my car, I saw a grey-haired woman with a cane walking toward me on the sidewalk. In the true Easter spirit of things, I decided to smile and wish her a hearty "Good morning!"

She gave me the finger.

Not deterred, oozing with Christian charity, I tried talking to her a second time. "I hope your day gets better from here."

"Piss off!" she yelled, flipping me the dirty bird once more.

I don't think she was headed to church anywhere. I imagined her frustrated with all the smug, smiling families going to church in their Easter hats and dresses. Come to think of it, I could empathize. Still never know quite which side I'm on.

A few steps later, I found a painted egg on the ground in front of somebody's house. It was a blown egg, meaning that the insides had been sucked out and it would last indefinitely. I didn't see any more like it, and concluded it must have been dropped or overlooked in an earlier egg hunt. I liked it for its colors (different from the normal Easter pastels) and the way that the blowhole resembled a tiny eye. I suppose the proper thing would have been to let it lie where it was, or else give it to some cute child after the service, but that's not what I did.

Morality and religion, these are open to debate. Beauty is worth stealing when you find it.

It is one of the oldest stories we have.

The man rides in to the city, triumphant, greeted by adoring throngs. A few days later those same crowds turn on him, prompted by an elite who do not wish the current order disturbed. Things go badly. The man is captured. His followers disburse. He is mocked and tortured. He dies in agony and shame.

This is the part where I am supposed to skip to the Easter Narrative and talk about the promise of resurrection--how life follows death, joy follows sorrow.

Except that we're not there yet. I would rather spend a little more time where we are right now, today, on Good Friday.

Who exactly did Jesus think he was? How did he conceive his mission? It's an interesting question, whether you are talking about the historical person, the literary character, or the religious symbol. Whether he saw himself primarily as military messiah, social reformer, or divine savior, he must have had doubts along the way. In those final hours, did he wonder whether he had deluded himself? Whether his death had any meaning or purpose, after all?

These are the dying words of Jesus on the cross. These are words of hurt and confusion. These are the words of someone abandoned by the very same God to whom he has given everything. This would feel like betrayal--an even worse betrayal than the famous kiss of Judas.

God must have a place for those of us who doubt, who feel used and betrayed, who cry out to the heavens in anger, bewilderment, and pain. After all, at the very end, Jesus himself was one of us.
Posted by Tess at 9:08 AM No comments: