On Being Tagged as the "Good Little Church Girl" 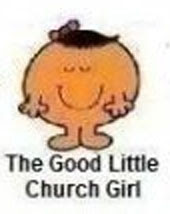 By now, if you have any kind of Facebook presence at all, you have probably seen a certain cartoon photo album making the rounds: you can tag it to show which of your friends is "The Grumpy One," "The Jock," "The Drama Queen," etc. (It's about time. All those "15 Things About Me" spinoffs were getting kind of old...)

A few days ago, I got tagged as "The Good Little Church Girl. " I think this was a joke. (Hi Rachael!) But it did get me thinking. A lot of people have made certain assumptions based on the fact that I was writing this book--like, that I would be shocked by the use of profanity or (far more disturbing) that I blandly approved and endorsed all forms and functions of institutional Christianity. This amused me, at first, but like all stereotypes, it wears a little thin.

I could try to lose the Good Girl rep by talking about my tattoos, my leather miniskirt, or the albums I have by Fugazi and the Sex Pistols. Except that nothing is sadder than Christian bloggers trying to prove that they are "hip," "edgy," and "relevant." (Just be yourselves, ok?) Plus, somebody might confuse me with the Barlow Girls:

Revolution is not to be confused with its trappings. Rock n' roll is the health of the state.

Here's the thing about religion. It's not nearly as safe as people think it is.

For the most part, religious institutions prop up the existing social order, but the same ideas have the latent power to transform (or destroy) that social order.

Take Jesus, for instance. He was executed because he represented a threat to the status quo of first century Palestine. Re-read the Sermon on the Mount and you may begin to get a sense of why. Flash forward to Joan of Arc, George Fox, John Brown, or Martin Luther King Jr. All were able to move and mobilize for social change, precisely because they stood for something more than the existing social, economic, and military power structures of their time.

We don't have to talk about exclusively Christian movements, either. Gandhi or the Dalai Lama, anyone?

We don't even have to talk about movements whose politics or principles I agree with. The Ayatollah Khomeini was one heck of a revolutionary. At least initially, the overthrow of the Shah of Iran had huge popular support.

Religion is dangerous. For this good little church girl, that may be part of the appeal.
Posted by Tess at 1:17 PM 4 comments: