Wholeness and the Implicate Order 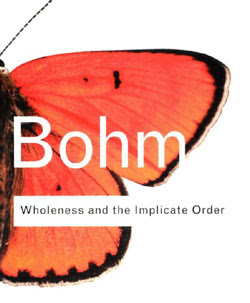 I am generally skeptical of authors who claim to find scientific proof for the existence of God. Whether New Age or Intelligent Design, they tend to oversimplify, if not actively mislead.

David Bohm is a little bit different. For one thing, he's oldschool -- died in 1992, worked with Einstein and Oppenheimer. Bohm posited the "non-local" hidden variable theory, an interpretation of quantum mechanics that requires that all particles in the universe be able to instantaneously exchange information with all others. This theory has not been disproven and was still the subject of active investigation as recently as 2007. (Nature 446, 871-875)

So what does all this have to with God? In his later writings, Bohm argues that our universe is better viewed as a living organism than as a mechanistic, deterministic system. What we experience as reality is actually a hologram-like projection of information from an immense multidimensional ground. Consciousness plays a rather special role. The interesting thing is that he has math to back it up.

I don't have the technical skills to evaluate that core tenets of his thesis, but I do like the way that he presents it. Wholeness and the Implicate Order (1980, Routledge) does not tell people what to do or how to act. Rather he shares a somewhat dry series of equations and analogies exploring what he freely acknowledges is a "necessarily sketchy treatment."

Bohm admits that his findings are not authoritative, but does not hesitate to ask the very biggest of big questions. That's my kind of belief system.