Admitting We Were Wrong 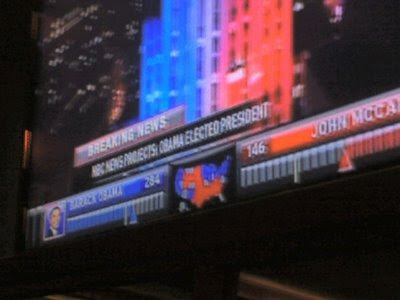 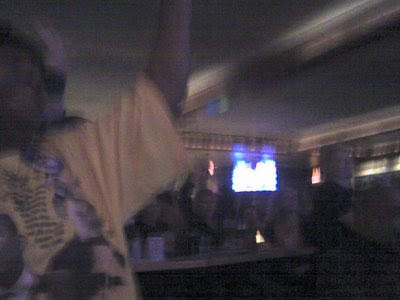 Visit my friend Jackie's blog for an eyewitness account of the mood last night at Atlanta's Ebenezer Baptist Church (where Martin Luther King Jr. was pastor).

As for me, I ended up watching the Election Night coverage at Paradise City Tavern, the local Democratic hangout. The place was packed to its fire code capacity before the first state results were even called. I didn't see anyone I knew there, but it didn't matter--we all had a common bond. I even scored an invitation to visit the United House of Prayer for All People in Springfield! People started counting as we got close to 11 PM. When NBC announced Obama as the projected winner, the entire room started cheering and chanting "Yes we can." This being a hippie town, somebody had brought along a djemba along and started drumming in time to the celebration.

I have seen Barack Obama in person twice--once in the fall of 2007, before a crowd of a few hundred at a South Carolina high school, and then again this spring, at a much larger rally in Charlotte. Both times he struck me as somebody who was for real--not in the political game for ego or power. I think he'll be a good president, quite likely a great one. Most of a U.S. president's job involves just two things--picking talented people and expressing a powerful, overarching vision. Obama's track record from the campaign demonstrates his ability in both of those areas.

Plenty has been said about how Obama ran on a platform of change, which is the obvious thing to run on when the economy and national morale are as low as they are right now. But this particular Democratic victory represents something larger than standard party politics.

It represents about as close to a 180 degree shift from the politics and ideology of George W. Bush as our two-party system, with its checks and balances, will permit. I would hope that people from the rest of the world, scanning the day's headlines, would discover this subtext, among others: "Sorry. We were wrong."

So many things irked me about Bush, but none more than his inability, during a debate with John Kerry, to recall a single mistake he had made during his presidency. If you can't learn from your mistakes, how can you possibly expect to govern?

To be sure, many Americans (including most of my friends and family) opposed George W. Bush from the start. But the size of Obama's victory margin and his success in red states like Indiana and Virginia makes clear that more than a few voters switched sides. 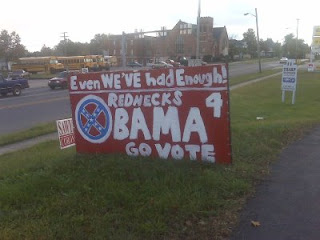 I think it's fair to say that our country has collectively acknowledged an error in judgment. This is only the first step to repairing the damage, at home and abroad, but it's a necessary beginning.

But the shift goes deeper than that.

In 1961, the year that Obama was born, blacks lacked the right to vote throughout much of the South. Not only was the election of a biracial president unthinkable--his parents' marriage was illegal in 17 states.

The nation and the world changed within a single generation.

We have all heard commentators observe that the election fulfills the promise of Martin Luther King Jr. "I Have a Dream" speech from 1963. Now here's what I think is interesting. This week presents strong evidence that our constitutional democracy is a self-correcting system--and that language is the medium.

Barack Obama was probably mocked by his opponents for his eloquent speeches more often than he was praised, but I don't think it's accidental that he excelled in this forum.

In a nation with no common ethnic heritage on which to form its identity, rhetoric takes on a special significance. The "I Have a Dream" speech is just one part of a linguistic tradition that stretches back to the founding of this country--including the Declaration of Independence, the U.S. Constitution, and Lincoln's Gettysburg Address. (Obama's campaign was pretty clearly trying to place him within this canon after he gave his famous speech on race in Philadelphia.) Technology has amplified the power of rhetoric and accelerated the pace of change--think about the role of television during the Civil Rights Era or YouTube during the last five years.

It took 232 years to expand the implications of "All men are created equal" to the point where the majority of the nation was willing to hand over the reigns of power to somebody with a different skin color. That's a long time. When you think about how much of this country's history was built on racial violence and oppression--and how firmly that regime was entrenched in the legal system--it's amazing that it happened at all. The only comparable event I can think of in U.S. presidential history is Nixon's resignation after the Watergate scandal--very different circumstances, but both examples of power yielding to the the moral authority of a democratic government based on a written constitution.

So what made us keep the "We the People" concept from the Constitution and throw out the part that counted each non-voting slave as three fifths of a person? Why is Jim Crow no longer on the books? Hint: it wasn't a bunch of political philosophers debating linguistic subtleties.

These words and ideals have meaning because they proved more compelling, more persuasive, than the language of greed and fear and life-as-usual. They embody what our nation aspires to be.

These words and ideals have meaning because men and women put their lives on the line to make them mean something. Many, although not all, took strength and comfort from a faith grounded in principles of liberation and justice. I was lucky enough to interview a few Civil Rights veterans during my book research. The term "hero" is perhaps an understatement.

Power concedes nothing. Every victory must be hard-fought. Every inch of ground gained must be defended. There will always be new battles, and that won't stop on January 20.

Rock beats scissors. Scissors beats paper. Words and ideals beat guns and money. It just takes some time, is all.

In the words of our next president,

"Tonight we proved once more that the true strength of our nation comes not from the might of our arms or the scale of our wealth, but from the enduring power of our ideals: democracy, liberty, opportunity and unyielding hope. That's the true genius of America: that America can change."
Posted by Tess at 1:24 PM 1 comment:

I am here in Madison with Joleen, and she is doing much better. Today is my birthday, so we are going to meet up with another friend who lives in the area and celebrate at an Ethiopian restaurant downtown.

This isn't where I expected to be spending my birthday this year, but that's quite all right by me. The extra hour from the end of Daylight Savings Time doesn't hurt either... : )
Posted by Tess at 1:44 PM No comments: