Ok, so this I definitely want to see...
Purple State of Mind

It's a conversation between two old friends, college roommates at Davidson in the 80s, one of whom gradually embraced Christianity, while the other eventually came to reject it.

From the Christianity Today review:

"For Marks [the atheist], embracing hell, should it exist, is a moral choice. When asked about his reaction to the judgment seat, he says, 'Why in hell should I allow you, who have been the head of a church that has persecuted and killed untold numbers of people, make me answer that question? The only moral choice I have, based upon what your son taught, is to say no, I will not believe. You, the God of this story, do not have the right to ask that question of me.'

Marks's vitriol is not based on liberal texts or atheist playbooks. While working as a reporter in the Balkans, he witnessed firsthand the atrocities of which humankind is capable. He saw with his own eyes a situation in which a religious war of words became a war of all-too-real bullets and bombs."

Screening in Charlotte in NoDa next Thursday, 3/27. Discussion with the filmmaker to follow.
Posted by Tess at 6:22 PM 1 comment:

In the beginning was the Word... or was it? 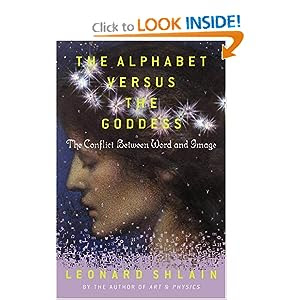 Haven't had the chance to post for a while. Been busy selling my house and working and stuff.

I've been reading a fascinating book called The Alphabet Versus the Goddess. Author Leonard Shlain argues that some four thousand years ago, the invention of written language drastically rewired the human brain. The effect was to elevate men's status and the status of rational, abstract thought--while devaluing women, the emotions, and intuitive ways of knowing. According to Shlain, this was also the time period when God began to be perceived a Great Father rather than a Great Mother.

I'm only halfway through I can't yet judge how well the author proves his thesis. But even the most speculative claims are still provocative and food for further thought. Shlain, a surgeon by training, writes beautifully and fluently. Plus he quotes William Blake, which gives him instant street cred as far as I am concerned.

As somebody who has always been torn between the world of image and the world of text, a serious investigation of that opposition (which shows up as Number Three in the Ten Commandments) and its implications for the course of human history, religion, and culture is right up my alley. While I was growing up, it certainly seemed that the written word held higher status (we had language arts class every day, but visual art was an elective once a week). In the age of multimedia, the web, and graphic novels, image may have gained back some ground. However, I suspect that the power of numbers (in the form of statistics, demographics, economics, and the almighty dollar) still trumps both word and image for most members of our society.
Posted by Tess at 3:22 PM No comments: