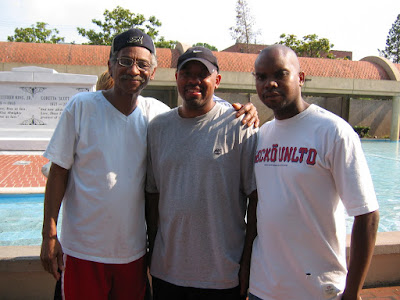 Fred Dunham, Eric Wilson, and Nick Clifton (left to right)
At the beginning of my road trip through the Deep South, I stopped in at the Martin Luther King Jr. historic site in Atlanta, Georgia. Here is a brief excerpt from that visit:

The King tomb is made of white marble, surrounded by a long and narrow reflecting pool. After some time has passed, I introduce myself to the three African-American men standing next to me and ask what brought them here.

Fred tells me that he is here with his son and grandson, to pay their respects. He is 62 years old, a retired garment worker and a Vietnam veteran, born and raised in the Sweet Auburn neighborhood. As a teenager he went to Ebenezer Baptist Church and participated in sit-ins at McCrory’s department store.

“He was an articulate man, and he spoke very well,” Fred says of Martin Luther King, Jr. “We had to get someone of intellect, who could speak for us all without a lot of rigmarole. He was the one that was chosen to lead the movement.”

Fred remembers a time when Atlanta public parks were segregated, remembers seeing his mother give up her seat on a public bus when he was nine years old. Tomorrow is Father’s Day and he is hoping to share a little bit of his past with the generations after him. “We’ve come a long way, but we still have not reached his full dream,” he reflects.

A few minutes later, inside Ebenezer Baptist Church, I run into the three of them again. “Something moved in you when Dr. King spoke,” Fred tells me. “It gave you hope. All your fears, all the prejudice and hatred, went out of you when you sat in this sanctuary. It was a place of peace and love. You went out and shared it with other people. So it began to grow.”

He remembers his training in nonviolent protest by the Southern Christian Leadership Conference. “If you had a quick temper, they wouldn’t take you,” he says. “People was chosen for these tasks. You had to be willing to wait and not hit back, until they got tired of hitting.”

Until now, Fred’s adult grandson Nick has been reserved to the point of hostility. He abruptly announces that the real force for change was corporations realizing the buying power of African-Americans. Altruism had nothing to do it. “People learned that black dollars and white dollars were the same thing...” he insists. “That’s what led to the change, more than anybody having a guilty conscience.”

Fred and I chat for while longer about his experiences in the movement. At the end of the interview, his grandson stops me again. He wants to clarify his earlier comment. Says Nick, “We should never forget the sacrifices of those who have gone before us. We need to respect everything they’ve done to get us here.”

Tomb of Martin Luther King Jr. and Coretta Scott King
Posted by Tess at 8:30 AM